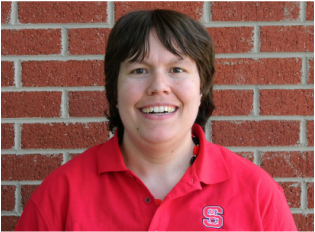 Julie's love of teaching and learning began early because of the joy she found in reading. From the memorable rhymes of Where the Sidewalk Ends and bedtime comfort of Goodnight Moon through Claudia running away to the art museum in The Mixed-up Files of Mrs. Basil E. Frankweiler and Scout learning life is not fair in To Kill a Mockingbird, she realized books opened up new worlds for her by taking her to places she would not have otherwise gone. Because she wanted to share her love of reading with others, she earned undergraduate and graduate degrees at The College of William and Mary (BA, English; MAEd, Reading, Language, and Literacy) and became an English teacher at Grafton High School in Yorktown, VA. After her husband, Scott, and she were married, they moved home, and Julie began teaching at Roanoke Rapids High School in 2008. They have one son, Alex, who is five years old and loves to have Julie read some of her favorite books to him.

Deciding to become an administrator came from a strong desire to make a difference on an entire school community and to build successful systems that allow scholars to become lifelong learners and teachers to grow professionally. Julie's hope is that every one of our scholars feels safe, loved, and inspired to achieve their fullest potential and make their dreams come true. She served as a principal resident at Chaloner Middle School in Roanoke Rapids, NC, in 2015-2016 and graduated with her MSA from NCSU in May 2016.